Come and join Jamie and Claire, immersing yourself in the atmosphere and history of old 18th Century Edinburgh as, together, we follow in their footsteps to tell their story.  During this in-depth tour we’ll go to the Outlander locations mentioned in the books and used in the TV series.  You’ll discover what it was like as Bonnie Prince Charlie and the Jacobites take over the city in September 1745 for 6 weeks, whilst Jamie and Claire desperately try to change the course of history and avert a crushing Jacobite defeat at the final Battle of Culloden.  We’ll walk with Claire 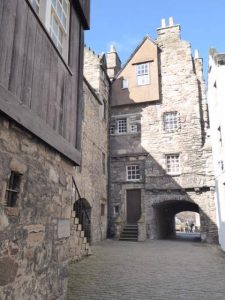 20 years later as she steps off the coach and goes in search of the print shop of Mr A Malcolm.

In addition, there are also other locations on this tour where you’ll discover more fascinating and little-known connections between Edinburgh and some of Outlander’s main characters. I’ll give you the interesting historical background to some of the storylines, so you’ll have an insight into what happened and what impact this period still has today.

As I also lived near Culloden Battlefield in the Highlands for many years, I have a real understanding of the tragic battle and the brutal aftermath that Jamie, his clansmen and all Highlanders suffered. There are many connections with Outlander and I’ll share with you some of my own surprising local stories that bring the characters to life.